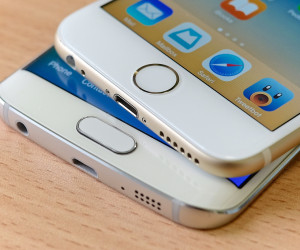 What more can we tell you about the BlackBerry that you don’t know? From a number of patent lawsuits, to being named the world’s fastest growing company by Fortune, to service outages, and being trusted by The Defense Department, BlackBerry has been around and looks like it’s sticking around.  While Research in Motion, now BlackBerry Ltd., has an incredibly rich history for a relatively young company, it would take more than a “short history” series to cover all that has happened.  We’ll save that for a future post, so keep your eyes peeled if you’re interested.

Three years and a number of devices after the BlackBerry 7200 series, Steve Jobs announced the Apple iPhone to the public in January 2007. In June of the same year, the first iPhone was released to the public.  Apple claimed to be reinventing the phone, with its multi-touch screen, easy-to-use conference calling, and incomparable messaging and email services.  Since its release 8 years ago, the iPhone has gotten consistently thinner with the release of each model.  The iPhone 6 and 6 Plus that we know today are among the fastest, most user friendly devices on the market (or so says Apple).

What most may not know is that at the time of the iPhone release, Android was also working on its operating system.  What was and still is novel about the Android operating system is that it is open source, allowing for developers and manufacturers to have some say in how the system looks on their phones.

What began as a startup, Android was picked up by Google in 2005 for a reported $50 million.  At first, the Android system was an operating system alone, but soon after the release of the iPhone, the minds behind it realized that they needed to have a concrete, mobile platform.  They launched the HTC Dream in late 2008, with T-Mobile as its carrier.

The greatest difference between the iPhone and Android systems is that the iPhone is only available as a singular package, completely controlled by Apple; whereas the Android system is available on a range of devices from a large number of manufacturers.  Interestingly enough, while there always seems to be hype about the iPhone, Google’s Android has authority in the market, globally powering about 85% of cellular devices compared to Apple’s 11%.

With all this in mind, what is in store for the future of mobile telephony? What do you think? Let us know in the comment section below.

A Short History of Mobile – part 2

We left off last time with RIM’s first Blackberry device, the Blackberry 850, and the…

A Short History of Mobile – part 1

It seems that these days we really take the SmartPhone for granted.  Rather than appreciating…