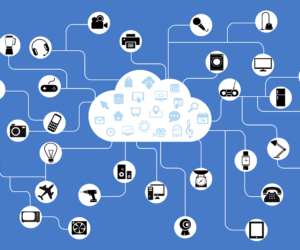 The Internet of Things.  IoT.  This idea has been floating around blogs and business news for a while now.  However, it seems that many people just see it as a buzzword and don’t really understand how to make any sense of it.  Well, let’s make it simple for you.  Basically, the term refers to the idea that more machines will be connected to each other through the internet than people. The Internet of Things is about connectivity that allows tech ‘things’ to share data without third party (human) interference.

The internet of things is about telecommunications. It’s key tenet is the communication between devices.

In Microsoft’s March/April 2015 issue of Chief Executive magazine, they say that IoT is really about three processes to improve business and data analysis strategies that already exist: information, knowledge, and wisdom.  First, you need the information from the particular ‘thing’ that you are interested in – data that is created and stored within the technology itself.  Then, information turned into knowledge of the problem that needs to be addressed.  Finally, this knowledge leads to gaining the wisdom needed to fix the issue and ensure it never happens again.  Maybe IoT is not as complicated as it seem… In the publication, Barb Edson, general manager, marketing, for Microsoft Cloud & Enterprise, says that it is simply “about taking a step back and understanding how you want to change your business”.  Since massive amounts of data are being generated anyway, IoT technologies will merely simplify this process.

Deloitte reports that “of 89 IoT implementations by 20 major providers between 2009 and 2013 revealed 65 percent of use cases were focused on cost reduction and efficiency, while 22 percent focused on risk management, with only 13 percent possibly targeting revenue growth or innovation.”  There is no surprise that the majority of IoT implementations focus on cost reduction and efficient, or that very little of the implementations target revenue growth.  However, with the incredible innovative technology available, it is quite shocking that the focus on risk management is a mere 22 percent.

Deloitte’s report makes a great case for IoT in risk management.  They focus mainly on the fact that employers, employees, and consumers alike expect a certain level of quality when it comes to telecommunications: high speed, uninterrupted, 24/7, limitless connectivity.  Especially in transportation, IoT technologies can be increasingly helpful in minimizing risk as they can send and receive information about things like driver behavior, traffic information (to manage time better), and maintenance updates.

This all sounds great, doesn’t it? Sure, but something incredibly and increasingly important in this day and age is finding a way to make sure all of these connections are as secure as possible.  This is where IoT has come into problems in the beginnings of its inception.

A recent study done by HP uncovers the threats to security that exist within IoT technologies that need to be improved over time, before their implementation.

An HP Internet of Things study looked into the 10 most popular devices in some of the most common IoT niches (such as TVs and home alarms).  Of their findings we found the following to be the most interesting:

With the amount of information being sent over these systems, including things as sensitive as bank information and social security numbers, it is astounding that such privacy concerns exist.  Regardless of this ‘doom-and-gloom’ look at IoT devices, HP offers three solid calls to action for the manufacturers of IoT devices: “(1) Conduct a security review of your device and all associated components, (2) Implement security standards that all devices must meet before production, and (3) Ensuring security is a consideration throughout the product lifecycle”.

What do you think? Have you had enough? Let us know what you’d like to see on the blog by leaving us a comment below!